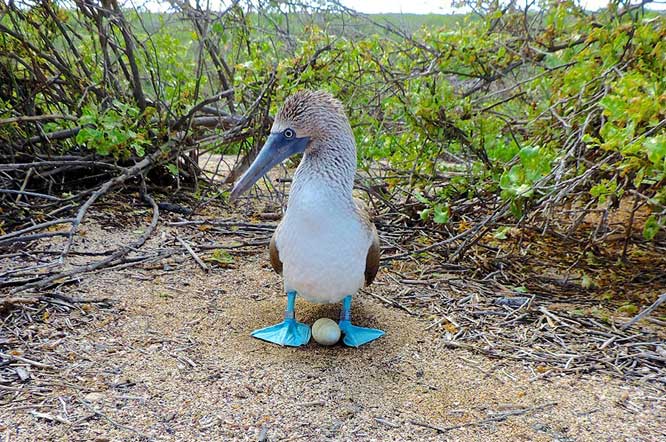 Aptly named, the blue footed booby is a sea bird with blue feet. It is native to the Western coast of central and South America, with half of its breeding populations being found on the Galapagos Islands, which are famously known to be where Charles Darwin developed his theory of evolution.

Roughly the size of your average seagull, boobies are flock birds, feeding primarily on fish. These incredible birds have developed blue feet as a way to attract mates. The bluer, the better. It has been found that the blue pigmentation comes from their diet of fish. Their blue feet, as well as their awkward movements while on land, are how they earned their name from early Spanish explorers.

Although the Blue Footed Booby is named for its awkwardness on land, it is a masterful diver. They can be seen diving from upwards of 80 feet in the air in order to catch they mackerel, anchovies and sardines. They have special air sacks in their head to protect their skull and brain from the impact of the dive. The booby’s swimming skills are also quite impressive. They will sometimes dive from sitting positions in the water, rather than from the air, and have been seen taking off to catch flying fish when they jump out of the water.

Keeping in line with its namesake, the blue footed booby’s mating ritual is as elaborate and silly as one would imagine. Males can be seen strutting and high stepping to show off their feet. They also do their best to point their beaks at the sky, jump around and whistle all too impress the female. If the female find the male booby’s dance flashy enough, she will allow him to mate.

Blue footed boobies are collaborative parents, meaning both the male and female take care of the nest. The birds lay their eggs in natural depressions found on large rocks near the sea. The eggs are then surrounded by guano, or bird poop, in order to help insulate and protect the eggs from predators. Parents also cover the nest with their webbed feet for added warmth.

Booby nests usually hatch around four or five chicks. The feathers of the chicks are so fluffy, that they often appear to be larger than their parents. In times of scarcity, one of the most dominant chicks will hoard all of the food, starving the other chicks in the process. Contrary to the silly name, growing up as a booby can be rough. Once reaching maturity, an adult booby will become part of a flock of boobies, numbering up to 200.

Sadly, a 2012 report has found that the Galapagos Islands Blue-Footed Booby population on the Galapagos Islands is in decline, likely due to a shortage of the fish that primarily make up their diet. As is any animal that relies on the sea, climate change is taking its toll on the booby, and only time will tell if they can rebound.