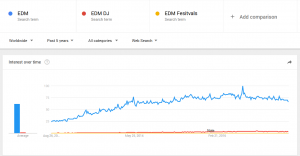 1. Twelve of the 100 top-selling albums of 2014 were electronic dance music (EDM) albums. Not only that, but Billboard’s 2020 year-end list of the Hot 100 singles included nine EDM collaborations. In all, an estimated 595,000 EDM tracks were released in 2022alone.

EDM earns the music industry an estimated $20 billion a year according to EDM popularity statistics at LowTone. The Coachella festival alone earns $47 million in revenue each year. About 147 million EDM concert tickets are sold each year, and of these, 58% are purchased by males purchasing a single ticket only. Between 2021 and 20202, interest in EDM increased 76% for the 35 to 49 age group.

The U.S. market might be at full saturation at this point, but the same can’t be said for markets in other countries, particularly in Asian countries. It doesn’t hurt that EDM is largely instrumental, helping overcome the language barrier that exists with more vocally-oriented genres of music. EDM festivals have popped up in China, Cuba, the Philippines, South America, and Vietnam in 2016 alone. And EDM is the only music genre that’s seen an increase in Google searches since 2009.

In the U.S., about 47 percent of EDM listeners are Caucasian, 27 percent are Latino/Latina, 20 percent are African-American, and 5 percent are Asian. Americans are the #1 listeners of EDM tracks, but in terms of sales, German and United Kingdom listeners purchase these tracks more frequently. Women make up 45 percent of the audiences at EDM events, but female DJs get only 6 percent of DJ bookings.

EDM is the 5th most popular genre for music streaming in the U.S. Across Europe, one out of every seven people says they’ve attended a live EDM event in the past three years. The number is one of every six in the U.K. and one out of every three in Spain.

Tech house was the main trend within EDM for 2015, but in 2016 tech house began to be overcome by techno (marked by heavy drums and a repetitive beat). .