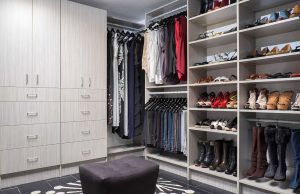 Storage space is in high demand all across the United States. Now more than ever, Americans are grappling with the retro particleboard elephant in the room: clutter. Swedish home goods giant IKEA reports that American men are losing socks and drivers’ licenses to the mess, while women hunt for their shoes and wallets. Everyone is aware of clutter, but few often confront the reality of living with too much stuff. These eye-opening stats put Americans’ junk-filled lives into perspective.

There are 300,000 things in the average American household.

Los Angeles-based professional organizer Regina Lark offers this shocking statistic. From the washing machine in the basement to the thumbtack in the kitchen drawer, U.S. homes are practically packed with stuff. Obviously, no one uses 300,000 items every day, but people often cling to objects that mean something to them.

Every year, especially on birthdays and holidays, American kids are treated to an influx of new toys. On the days in between, they are bombarded with toy advertisements at every turn. Extra toys are a big part of the ever-present clutter that dominates most American homes.

The average American spends a year of his/her life searching for lost items.

In apartments and houses full of clutter, it’s easy to identify with this statistic from the US News and World Report. The hunt for a missing thing is not always urgent, but when it is, it can be disastrous. Americans spend an average of six minutes looking for their keys each morning.

Eliminating clutter would reduce the time spent on housework by 40%.

Chores are a drag, but it doesn’t have to be so bad. The National Soap and Detergent Association reports that less stuff in the house means less work for the cleaner. If people could bear to part with their objects, they could relieve themselves of a lot of busywork.

People do not look at 80% of the papers and information they keep.

Papers, files, cards, folders, letters. Individually, they don’t take up much space, but collectively they are major contributors to household clutter. People may feel the need to save every bit of information. But according to Agency Sales Magazine, 8 out of 10 papers in the house don’t even get a glance.

The average American house is double the size it was in the 1950s–and getting bigger.

NPR reports that the days of quaint seaside cottages and one-bathroom family homes are over. Although American families typically have 2-3 kids, their houses are expanding. McMansions with tons of private space for each family member inevitably encourage a high volume of accumulated stuff.

25% of Americans with two-car garages can’t park their cars there.

And it’s not because of poor driving skills. Garages are clutter magnets. Often separated from the rest of the home, they are “out of sight, out of mind”–the perfect place to store odds and ends. This statistic comes from the U.S. Department of Energy. The study also concluded that 32% of Americans with two-car garages only have room to park one car inside.

All of this clutter is starting to weigh on people. Today, 1 in 11 U.S. households soend up to $1000 a year renting storage space for their stuff. The Self Storage Association states that there are 2.3 billion square feet of storage space in the United States–enough room to fit every American citizen into storage. During the economic recession, people who faced foreclosures relied heavily on storage units. While this trend persists, more and more people are measuring the costs of renting a unit and deciding they can’t afford it. Despite a dip of 2-3%, the American storage industry is still worth $154 billion.

Unsurprisingly, America’s family heirlooms, unused writing desks, and VHS tape collections have not gone unnoticed by Silicon Valley. L.A.-based startup Clutter aims to undercut its self-storage competitors while also offering better security and one huge perk–they do all the packing and storing, organizing items with a bar-code system.

Cofounders Brian Thomas and Ari Mir started doing business in 2015. As Baby Boomers are trying to shed their stuff, warehouses are filling up, and Mir and Thomas seized the opportunity to combine cloud technology with the touch-of-a-button “magic” provided by on-demand service workers, not unlike those at Uber and Seamless. And they’re not alone. Similar startup MakeSpace also promises to make clutter disappear into storage. The app ensures that the only time users will have to lift a finger is to order select storage items to be delivered to them.

America’s enthusiastic consumption habits and sentimental attachments to objects culminate in the perfect stuff-storm. While many people seek solutions, many more are willing to live with the chaos.